In a first for Montserrat, this year we will be holding our annual Fish ‘N Fins STEAM (Science, Technology, Engineering, Art & Mathematics) Festival from Friday 21st June to Sunday 23rd June. Throughout the weekend, we will be conducting a number of hands-on Science and art activities with our Fish ‘N Fins students, in addition to having multiple industry professionals and ocean advocates making special guest appearances to discuss marine conservation and ocean advocacy.

Our keynote speaker for the weekend is Grace Young, an MIT ocean engineer, ocean explorer and aquanaut. Grace was an engineer and scientist for Cousteau’s Mission 31 and was one of the 14 world-changers named 2017 National Geographic Emerging Explorers. Currently, Grace is a PhD student at the University of Oxford, in addition to being the Chief Scientist for the Pisces VI, deep-sea submarine. Grace’s passion for the ocean has brought her to Montserrat on a global science storytelling mission to identify how the reefs are recovering after natural events such as Montserrat’s volcanic disaster. She will be exploring and filming our island’s reefs with crew from National Geographic Italy.

During her talk at the Fish ‘N Fins STEAM Festival on the night of Friday, 21st June, Grace will be addressing her journey to where she is now, her perspective as a female engineer working in a typically male-dominated field, and also give advice on how our emerging ocean leaders can succeed in their chosen career path and have a positive impact in marine conservation.

Can Young People do Science?

From behind the lens to plastic-fighting Superhero

Dilemma: I am an Ocean Advocate & My 6 year old son is a Fisher

Helping Children Overcome Their Fear Of The Sea 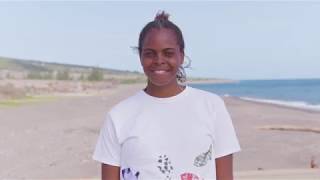